Most of us aren't fortunate to have unlimited space and unlimited money and unlimited patience from our cohabitors, and I reckon most of us will acquire far, far, more lead men than can withstand the tolerances of those limiting factors so inevitably one must either sell up (shudder) or pack up.

I've got a couple of GW cases which I've used for transport in the past but as anyone who has them knows they're quite inflexible in terms of the types of models they can store without hacking them up and in themselves are quite awkward for storage purposes as the case is quite bulky. I also considered BattleFoam who do seem to have quite an excellent range but the prices (at least in GBP) are quite expensive compared to KR who came to me as a recommendation from a friend.

Spoiler alert, this is definitely the worst aspect of the whole deal.

Seems like KR had a site upgrade since I initially reccy'd them, which is definitely an improvement since now you can actually see a clear picture of all of their products and the purchase journey is, to be fair, pretty clean and easy. There's quite a lot of choice in bags and trays and it's all interchangeable naturally.

Since I was interested primarily in storage I went for the cheaper cardboard cases but with the intent to pick up a couple of their rather sexy aluminium cases in future for those space hulk road trips. Because I knew I was going to ultimately need quite a lot of these things I went for a semi-random selection of their standard and custom (seemingly meaning vehicle shaped) trays as a sort of trial - I highly recommend this because where it starts to fall apart is in trying to work out exactly what you need.

None of the images have any scale shots with models so it's down to guess work, inference, and deciphering exactly what the difference between an "M3H" and an "M4H" and a "F3T" might be. It's all do-able and there are some documents to help but it's not at all obvious and kind of a barrier to sales you would think. There's also some gotchas in there: the tray which says it fits Terminators? Yeah 90's ones maybe. 40mm bases, not so much.

Email confirmation straight after purchase which sounds like a no-brainer but not every company does it. While it's evidently a small operation the turnaround was extremely quick - a couple of days after purchase another email notifying dispatch, and then another day or two and it was delivered. I went with the Royal Mail 1st class option which was shockingly cheap and happily avoided having to deal with any of those truly diabolical private delivery companies.

All in all, excellent - though I always think the measure of service is when things go wrong, can't complain at all.

So this is the part where I discovered the Terminator tray wasn't going to work, but fortunately these things are generic enough so it was easily re-purposed.

I also bought a set of the "610" range trays designed nominally for 6mm - 10mm scale (natch). Planned on using these for my vast collection of unpainted epic scale models. Again, slight problems here because although the bulk of epic infantry is fine, most of the HQ stands and especially the modern (and more delicate) troops have about 2-5mm more height than the tray allows. Bloodletters probably have the sculptural structure to be ok, but take a look at the cultist model - not gonna work. They fit five trays to a standard case, but because of the height problem I'd definitely like to see these available 1/4 deep instead. Until then, I'll lie my stands sideways (if you have 20 square bases look elsewhere).

Much less successful were the "pick-and-pluck" trays. The horizontal bars aren't divided and the vertical bars are uniform so essentially they either don't really have the granularity or are too space inefficient for anything in particular which isn't covered by one of the "custom" trays. It's annoying because I was relying on   these to cover awkward shapes like genestealers or trolls and such who don't seem to be well catered for - the best fit I can see are the 60mm cylinder trays but they all take up too much space or are too space inefficient depending on the depth you use. Nonetheless if you have the need IG12 or IG20 seem the best options. 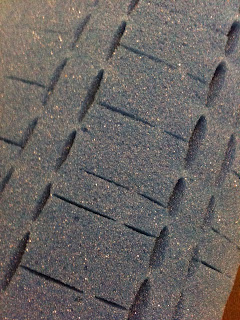 Past these problems though, the rest of the trays seem to do pretty well what they claim - the rhino tray is a little snug perhaps if you have any conversion work to protect. The standard infantry trays better fit your troops (whatever size they may be) than the GW trays, and the half-tray and variable depth recipe is hugely valuable for mixing and matching whatever you need. 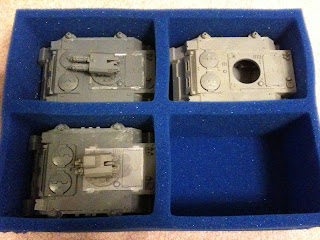 A final note on the box itself - clearly cardboard isn't for everyone but for my stated goal of storage it's been absolutely fine. Clean, simple, strong. Job done. KR do basically any option you might want though, hard and soft carry cases, varieties of size etc. I'll have to review those options as I get them though...

Well there's a lot of niggles there. Trays which don't quite fit modern models, a shop-front which is too opaque for it's own good, a useless product designed for utility.

And yet on balance I have to say I'm happy with the product and I've bought again from them since and will do so again. I suspect the secret is buying in bulk and in doses to accommodate the inevitable lapses in judgement you will make. 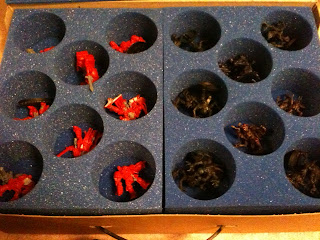 It looks to me that Battlefoam might make superior trays to fit those awkward models, and from what I can see of their pick+pluck that might be superior too. If you lived in the US perhaps an argument could be made for Battlefoam, but without wanting to suffer punishing import duties KR is super-competitively priced in the market (which is not a cheap one) and does 95% of what you want.

Email ThisBlogThis!Share to TwitterShare to FacebookShare to Pinterest
Labels: Review