As mentioned previously I managed to grab myself a bunch of Squats at a bargain price a while back. Normally the high demand puts the little fellas at kind of a stupid-high price bracket on eBay, so I've been a bit careful building and painting them so as not to waste them.

On the other hand, I find them ridiculously fun to paint. Can't explain it, just like it. So after BSGH pushed me to paint one up, I've been slowly putting the rest of them together around my plans for an almost Inq28-ish little ragtag group of Squat survivors - salvaging and raiding for relics of their shattered culture, for sheer survival, and yes for something, anything, (plot driver alert!) which might be used to wreak vengeance on the hive fleets. Truly, it takes a dwarf to do grudge-bearing properly. 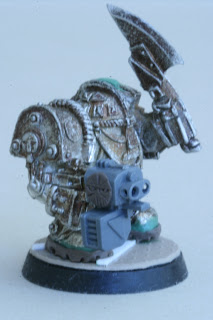 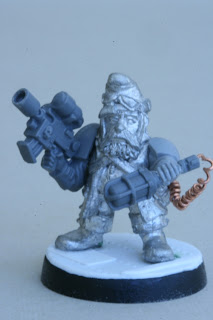 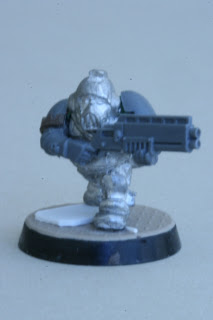 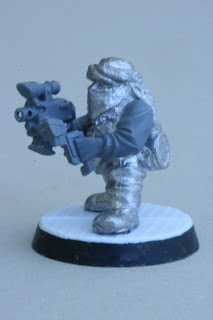 Scanning dark ships
I found the Exo armoured model to be a little short next to his companions so I sculpted on some platforms to his boots, and considering I expect him to be more heavily armed I did something a little sacrilegious and curt down his existing bolter (I think, they made things smaller back in RT era) and replaced it with an appropriately squatified storm bolter.

The rest of them have had very little conversion work done because they're already festooned with all kinds of explorer-suitable detail, but they've got an assortment of scout and cadian arms. I didn't want to have them crossing their chests and obscuring that detail, and the cadian special weapons and even lasguns look too oversized but there's only so many bolt pistol in the air poses I can get away with. Think I'll have to scratchbuild some lascutters for some of the remaining guys I have.

Still trying to get a hold of a living ancestor to lead my little group, and in the meantime as light relief from the whole SH3D thing (because I felt that wasn't slowed down quite enough yet) I'm trying to work out what parts to add to these chassis to build the Golem class (Squats seem to name their machines after humanoid monsters) robots I see these guys building to do their point-work. Reference points here are ABC warriors by Kev Walker, Clint Langley, and Bisley, particularly Hammerstein and Mongrol. Inspiration though, not going to try and model those guys.
Posted by wait, what? at 22:24