Long time coming this one, but please be gentle there's a lot more work here than it would seem.

Behold! The first prototype board section of my Space Hulk 3D project... 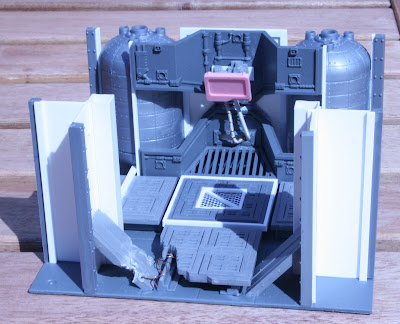 This one is a T-section, my plan being to do this project in groups of a corridor, a room, a junction, and an entry/dead-end piece to keep thing varied and my interest up as well as to have something functional as soon as possible.

This is technically my second prototype - the first was based on the 20mm grid side of the regiment tray and then 47mm (ish) grid of the CoD walls and floors. As I've discussed before this turned out to be quite a huge problem for a bunch of reasons and I hit on the idea of going to a 50mm grid (which I am convinced is the perfect solution and a great gaming opportunity).

I've also discussed the door problem before, and on the right is the solution I came up with for that one - magnets!

I've decided to go with what I deem to be a midrange plan where some key tiles in varying combinations within the board section type will be magnetised - using 6x3 disc magnets since the regiment tray edges I'm using for elevation are 6mm deep - so I'll be able to create both plain and door tiles variously. That also opens up the ability to make tiles to represent open doors, destroyed ones, pitfalls and ladders maybe, maybe barricades, who knows? Opportunities!

I was really worried that the strength of the magnets would be greater than that of the superglue, but it seems not to be a problem. From what I can gather these class of rare earth magnets are actually a kind of compressed powder which probably means they're quite porous and therefore eminently super-gluable.

The next problem I encountered was actually just dealing with some of the tiles. If you look at what you get in the CoD sets one of the things you'll notice on close inspection is that the architects of the Imperium really seem to love their trapdoors. As detailed as they are those trapdoors don't take a model standing on them so well (I believe Nedius noted this too) and for the purposes of a space hulk, it's really kind of too much, you'd expect something more basic, you can't have every three steps being a hatch, y'know?

So I took a drill and some heavy duty scalpels and set to cutting that trapdoor out and making the tile look a bit more basic (I really need to get a dremel, this was way too much work). I then smoothed out the edges of the hole and lined it with some plastruct, and then put some aluminium mesh across the bottom to finish it off. Finally I wrapped the outer edges of the tile with more plastruct (all 1.5mm thick stuff btw) to reduce the apparent gap between tiles for this central one.

This is a reverse shot showing some of the back wall detail. I'm trying to keep this kind of gothic-lite because I want this to be believably functional and useful for Colonial Marine missions too. So I'm going to try and keep the heavier gothic stuff on the external walls where it's sort of non-functional decoration, as it were. Unlike Nedius, I've no intention of using this for 40k gaming so I don't care about the outer wall.

Finally, there's the detail section, the USP for this section - some kind of wall mounted monitor, a simple resin detail with some cast power cables. When I eventually get around to painting this up I plan to do it with a lot of OSL (which I love), and that's going to mean things like a monitor flickering static or BSODing lighting up this junction.

So this is where I am so far. None of this is finished, I still need to do something to finish off the back wall and the door area, I need to make the broken tile believably rubbled, and I need to plant details for the kind of invasive features I was talking about in my research post. And then I want to add some kind of low-level lighting elements to the floor, but I think I'll need to add them after they've been sprayed up because I'm planning to use some blue-translucent styrene rods, and I don't trust masking tape so much.

Next up is probably the corridor section (in between some squats) which I expect to be faster (because I've solved a bunch of problems now) and I hope what I learn doing that I can use to finish up the junction later. We'll see.

Is it me or does bloggers' WYSIWYG layout engine suck massively? Can't really be bothered to hand edit the HTML though, too much like work :)
Posted by wait, what? at 20:20