Another week, another corridor, and a corner too this time. I'm basically leaving these in a 90% complete state because I want to be able to come back to them with the space to add uniform elements or things I learn later on, but the shells of these are pretty fixed I think. 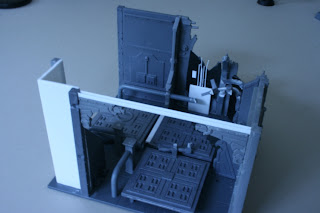 The corner actually came together quite quickly once I'd gone with the destroyed tile in the corner - after that it was doing some fun destructive stuff to give the impression of an external blast - I especially like the twisted ladder myself.

I'm also realising that these pieces lack curves - even rounded inner corners you might see on some prefab pressed industrial plates. That led me to add the guard rail around the flooring (built from regiment tray sprues - unusually for GW they're tubes) which I like quite a bit and might use as a tie-in feature to some future pieces. I can't quite work out what to put at the top of the inner corner on the plinth, maybe a light but I'm ambivalent. Ideas welcome. 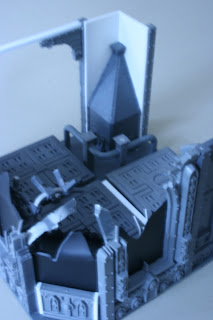 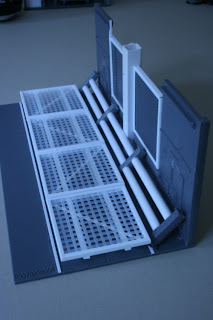 The corridor took considerably more time, not just because the floors were scratch built, but because it was created as a homage to the Alien corridor I'm using as wallpaper here, and that meant I spent a lot of time trying to work out how to approximate the look. Indeed I seem to spend as much time working out how to solve problems as actually putting knife to plastruct - problems like dealing with those damned windows and filling in empty spaces, extending CoD elements to fit the grid, and worrying about how to create wall sections from scratch in an efficient way (still not solved that one, and I'm nearly out of non-windowed walls). With this latest one I'm using a rhino floor hull piece and a ton of plastruct but the more raw the material the more work it requires to get it to match the detailing and dimensions. If anyone happens to have a bright idea about suitable plastic walls please shout! 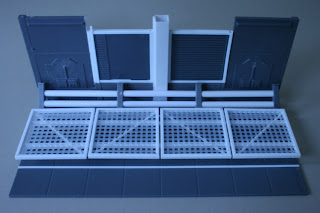 And the more keenly observant amongst you might have noted that the corridor has one invisible wall. Not a cunning 3D strategy, merely another chapter in the sad tale of bitz suppliers vs consumers. Also, I still have some thinking to get done on the piece so I suppose it's... no it sucks :(

It's beginning to dawn on me that even producing just one section a week, it's still going to take me two years to have a decent set of this. I begin to see why Nedius's project stalled - and I'm not even painting these yet. So it goes.
Next up: a dead end section, or maybe a pair. I want to create a kind of hidden away cupboard of a shrine: one Imperial and one Chaos (or 'stealer cult, or ambiguously between as the cult originally was). Should be faster and a bit more fun to build.
Posted by wait, what? at 18:58

Email ThisBlogThis!Share to TwitterShare to FacebookShare to Pinterest
Labels: SH3D