First of many, many, many, corridors. I actually have three others underway but this one A). is completed and B). actually came out in the photos. My next post will be about tripods and lightboxes I assure you. 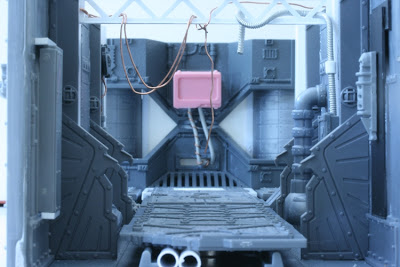 This is a four long corridor (the long shot here is against the junction piece I've already done). Buttressing has been internalised (using the least gothic of the supports) to provide both structure as well as help create the invasive aesthetic I'm going for. The walls have been reversed so the decorative features are on the external face (which I don't care about) and the inside has had various "plates" to cover the windows. That was a bit of an experiment since the damned CoD walls are like 90% windowed. It doesn't come out very well in these shots but I feel it's successful in as much as the windows are gone and it doesn't look simply like a boarded up windows, however I need to find a faster way of achieving it - as with basically the whole project. 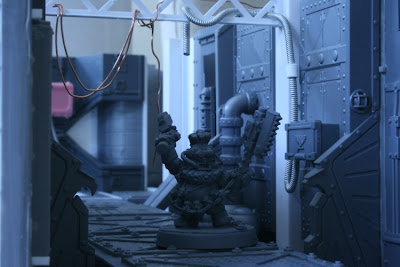 This shot gives a little scale but also shows off the bit I'm really happy with - the cross strut looped with cabling. I actually intend for the heavier cable to be suspending a crude lamp (the one from the teleport homer) but I couldn't find it in my bits box, so it's awaiting a bits order to finish it off. I digress though, the point is I really like how the strut gives me the impression of a ceiling - and hence confinement - without having one, how the cabling suggests decay and functional space and also goes to the invasive aesthetic (and from a gaming perspective it hangs over the gap between tiles so it won't actually be invasive), and how it brings the piece together, wall to ceiling to wall to floor.
Hope to get a tripod this week so I'll have better shots (and shots of some more corridors) next time.
One percent complete. Ninety-nine to go.
Posted by wait, what? at 21:56